Have you ever wanted to copy some text from a dialog box which doesn’t provide such functionality?
Textify was created to solve this problem: you can point your mouse over the text, click on the mouse shortcut (Shift + Middle click by default), and get a selectable view of the text.

The colors can be changed in the .ini file.

Limitations: double-words across rows are not processed.

The source code is available on GitHub.

This plugin fixes a minor, but annoying issue with the CPU dump history navigation on OllyDbg 2.

Without the plugin (clickable):

With the plugin (clickable):

Symbols on Demand (an OllyDbg plugin)

OllyDbg is able to use dbghelp.dll and symsrv.dll to show extended debug information, such as the module source code (if referenced by the debug information) or module symbols from a PDB file (which can be fetched from the Microsoft Symbol Server for system modules). The problem is that if you turn on this option, module loading becomes much slower. On the other hand, this information is very handy, so there’s a dilemma as of whether to turn it on.

OllyDbg v1.10 and v2.01 are supported. For, OllyDbg v1.10, there’s additional functionality: you can set the symbols search path, which is set by default to SRV*.\Symbols*http://msdl.microsoft.com/download/symbols. You can also choose to retrieve undecorated symbol names. These options can be set in the INI file of OllyDbg, in the plugin’s section.

For your convenience, here are the dbghelp.dll and symsrv.dll files: 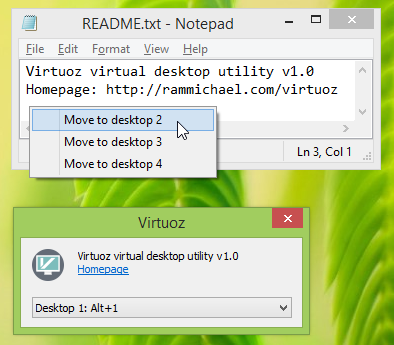 Virtuoz was designed to be a minimal and robust program that allows to have more than one desktop on Windows. It was inspired by Sysinternals Desktops, but uses a different approach, which doesn’t impose the limitations which Desktops is bound to.

Virtuoz is designed for Windows 7 and Windows 8. Note that Windows 10 is not supported (Windows 10 supports virtual desktops without extra software).

This tiny plugin allows you to copy the address of the selected item/command/byte with the Ctrl+X keyboard shortcut.

Note that the plugin works only for OllyDbg v1.10. For OllyDbg v2, you can achieve the same with:
Options -> Edit shortcuts… (“Copy address” in “Dump: Edit”)

This plugin makes your copy of OllyDbg portable, which means that you can copy the OllyDbg folder to another location without having to fix ollydbg.ini manually.
OllyDbg v1.10 and OllyDbg v2 are supported.

Nowadays it’s a reality that many software installations are bundled with potentially unwanted programs, such as toolbars or scareware system cleaners. If you’re a power user, you probably know that you have to be very careful while installing software, because if you miss a checkbox you might spend hours afterwards cleaning up the mess. If you’re an average PC user, you possibly leave everything by default, thus installing lots of additional unwanted programs without even knowing it.

I always thought that it’s wrong to provide these potentially unwanted programs by default, but the reason for this is clear: the more users install these, the more money the setup owner makes, usually at the expense of your privacy. Well, it doesn’t have to be that way anymore, thanks to Unchecky! 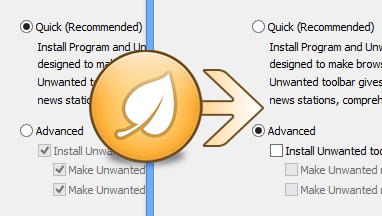 END_OF_DOCUMENT_TOKEN_TO_BE_REPLACED

Quick Folder Menu is a tiny application that opens a menu of the folder you specify as a command line parameter.

It’s mostly based on an AutoIt script by LarsJ.

It has a couple of bugs I don’t know how to fix, e.g. it doesn’t always close when you click away (Update: fixed in v1.1).
I hardly know how it works at all. But it works, and I find it handy, so in case you might make use of it, grab it below.

The source code is available on GitHub.