Windows 10 virtual desktops and the order of taskbar items

Have you ever experienced the following taskbar ordering issue in Windows 10?

I encounter it once in a while, and I wanted to have a fix for it for a long time now. Finally, the virtual_desktop_order_fix advanced option of 7+ Taskbar Tweaker v5.2 fixes this issue and preservers the order of the taskbar items when switching between virtual desktops.
END_OF_DOCUMENT_TOKEN_TO_BE_REPLACED

Microsoft has announced that the second update of Windows 10, the Anniversary Update, is going to be available on August 2. While the update is not available yet, there are rumors that the update will be based on Windows 10 build 14393, which is available for the participants of the Windows Insider program.

A couple of days ago, the first major update for Windows 10 was officially released. Unfortunately, the update has introduced enough changes to break compatibility with 7+ Taskbar Tweaker, as many of you have noticed.

I can’t tell when a compatible version of 7+ Taskbar Tweaker will be ready, but I hope to make an alpha version available in a week or two.

I want to thank everybody who supported the porting effort: Mike T, Fraser Ntukula, and other contributors.

About a week ago, Windows 10 became generally available for updating. Today, I’m happy to present the beta version of 7+ Taskbar Tweaker, which is compatible with Windows 10. All the existing options should work, except the following advanced options: list_reverse_order and tray_icons_padding. These two options cannot be tweaked in Windows 10 using the same tricks that the tweaker used in earlier Windows versions, so they don’t work in Windows 10. I might look at reimplementing them for Windows 10 in the future.

Please try the beta version, and if you encounter any issues, please let me know.

I’m happy to announce that the very first alpha version of 7+ Taskbar Tweaker for Windows 10 (Technical Preview) is ready for some testing. Those of you who have donated for the porting effort can get the alpha version here (link removed).

Please note that this version is not complete. While several options work well, others don’t work as expected, and some don’t work at all. Most of these issues are known, and will be fixed in future alpha versions.

Windows 10 Technical Preview was just released by Microsoft several days ago, and I’ve already received many questions about 7+ Taskbar Tweaker support for it. I’d like to answer some of those.

Q: I tried to run 7+ Taskbar Tweaker on Windows 10 Preview and I get a messagebox that says it’s only for win7/8. Do you reckon it would work if you disable the windows check inside 7+ TT?

A: No, that won’t work. What you’ll get instead is a different error message box, or, if you’re less lucky, an explorer crash.

A: That’s kind of correct, depending on what you’re considering as a “small adjustment”. But that’s not something that can be done in a couple of minutes. Or hours. While that’s obviously less work than writing 7+ Taskbar Tweaker from scratch, it requires careful tuning for the memory layout of the new explorer, and the fact that it looks/behaves just like explorer from Windows 8.1 doesn’t help here.

Q: Can donations, as in the case Windows 8.1, accelerate the situation?

A: Yes, it will help. You can donate here.
Include the w10p (Windows 10 Porting) word in the donation comments to specify that your donation is targeted for the porting.

Below is a progress bar of the donations, with the goal set as the estimated time the porting is going to take, with an average wage.

Thanks in advance for your help! If things go well, I’ll try to allocate time for it next week. 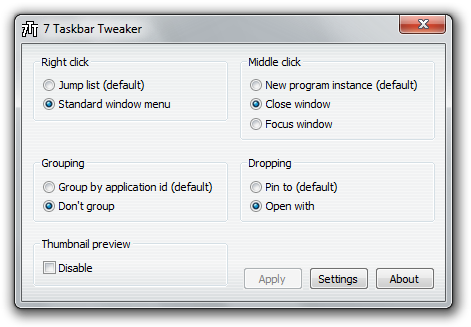 And here’s where it all started.

7+ Taskbar Tweaker v4.5, the stable version that is compatible with Windows 8.1 Update 1, is finally out!

Two months ago, I’ve created a blog post describing why adding support for the new Windows update is not trivial, and provided a way for you, the users, to support the porting effort with donations. I was pleasantly surprised by the quick completion of the goal. I want to thank everybody who supported the porting effort: Charles George, Justin Shillock (Platypus Man), and other contributors.

In addition to the support of Windows 8.1 Update 1, 7+ Taskbar Tweaker v4.5 fixes a couple of minor bugs comparing to v4.4.6. One issue that is still left unsolved is the lack of proper support for Metro taskbar items. Windows 8.1 Update 1 has a separate handling logic for Metro tasks, so it will require some effort. I plan to get this fixed in one of the future versions.

An update for Windows 8.1, called Update 1 or the Spring Update, was officially released by Microsoft a couple of days ago. This update broke compatibility with 7+ Taskbar Tweaker. I’ve published a post, 7+ Taskbar Tweaker and Windows 8.1 Update 1, explaining the reasons for the breakage.

Today, I’m happy to announce that the first pre-release alpha version is available for testing! If you have donated for the effort, you can get the link here (May 10: link removed).

Currently, only the 32-bit version is available. I hope to get the 64-bit version done within the following week. Stay tuned!

Update (April 17): The 64-bit version is available as well! Please try it, and report any issues you stumble upon.

Update (May 2): A public beta version is available here.